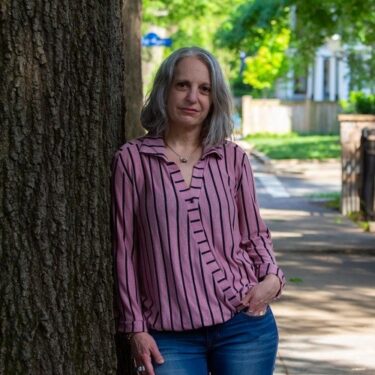 Dr. Tracey Gendron serves as Chair for the Virginia Commonwealth University Department of Gerontology, as Director for the Virginia Center on Aging and is the author of the book Ageism Unmasked: Exploring Age Bias and How to End It. With over 25 years of experience as a grant- funded researcher and nationally recognized speaker, Tracey is dedicated to raising awareness and ending ageism through education. Tracey has a Master’s degree in Gerontology, a Master’s degree in Psychology, and a Ph.D. in Developmental Psychology.

This interview is a part of a series on ageism, completed by de Tornyay Center predoctoral scholar, Sarah McKiddy (sm256@uw.edu). Read her article on ageism here, and find more interviews on ageism here.

Since you started your work in ageism, how has your definition or concept of ageism changed?

I think we’re just starting to have these conversations on age. It’s starting to crack through more mainstream consciousness. There’s still a long way to go but there’s more movement than there ever has been. You can Google ‘ageism’ and see more articles about it — more studies and more information than there ever has been. I know my concept of ageism continues to evolve the more I dig into it.

I’ve been studying ageism now for over 10 years, and it started for a variety of reasons. It was a part of my dissertation in which I was looking at aging anxiety. When I was first examining and understanding ageism, I had more of a unidirectional framework with it and looked at it more exclusively towards older people. The vast majority of research is looking at those negative attitudes towards older people – towards our own aging – and the detrimental consequences of that.

In more recent years, I started to explore the omnidirectional nature of ageism and not only how it is directed towards older people but how it’s directed toward younger people.

Another area ageism evolved for me is the concept of generations and how generational labels and stereotypes perpetuate ageism. I see them as a form of ageism; labels are another layer because those have become so normalized that we just refer to people as boomers and millennials, which have now become catch-all terms.

Now there’s a push to disentangle ageism from ableism and figure out not only how they work together but how they also need to be pulled apart. For a long time, and I write about this in the book, when we talked about successful aging, we were really fighting ageism by saying, “No, not all older people are frail. In fact, only 4% live in long term care and the vast majority live in the community.” And that’s fine, but we did enter that slippery slope of then perpetuating ableism at the risk of fighting ageism. That’s a newer thought in my mind of how we talk about it but in a way that doesn’t stigmatize disability or frailty. Rather, we need to value people in all abilities, stages, and ages.

In thinking about the ‘OK, boomer’ trend, was this a contributing factor to the idea of age groups as monoliths? What is the benefit, if any, to sustaining generational labeling?

If you look at it from a demographer’s perspective, I understand the value of lumping groups of people together in order to understand behavior. The problem when we do that with generations is that it’s leading to this idea of a monolith and that everybody within this group has the same values – the same likes and dislikes and preferences – which isn’t true.  It’s capturing what’s happening at this point in our history, but it’s not capturing the nuances of how people who were boomers felt when they were millennials’ ages.

I don’t think we’re going to move away from it. I think it’s sticky, but I think the more we talk about the way it doesn’t make sense, the closer we will get to people questioning its validity. We’ve been building on the idea of generational labels since the book on generational theory came out in the ‘90s. We’ve even built a whole series of workforce trainings on how to manage generations in the workplace and how to change your culture so that ‘Generation Z will stay. We’ve built these bricks, and we’ve created this wall, and now it’s time to deconstruct that and take that apart.

I think a lot of people don’t really recognize that ‘OK, boomer’ came out of one millennial’s frustration with being dismissed for being young. This was an ageist response to ageism, but we shouldn’t dismiss the origin of ‘OK, boomer’ with a simple notion that it is wrong. We must look at what it represents, which is a pushback against ageism. That’s important because then people of all ages can come together and recognize that when you stereotype a so-called “millennial” and say, “You don’t know what you’re talking about because XYZ,” you’re contributing to ageism. Ageism is a distraction technique because blaming a generation distracts us from the real issue. It’s easy, lazy, and convenient.

Regarding generational labels or terms like dementia, are there any terms or phrases that you think we could continue to pursue alternative language or nomenclature for?

The most innocuous is to use ’older people,’ but I hope one day we can embrace ‘elder,’ and the reason I like it is because when you think about it, we do have all these stages of development in life, and when someone is in childhood, we call them a child. When someone is in adulthood, we call them an adult. We don’t push back against that because there’s no stigma associated with it. Someone who is in elderhood referred to as an elder just makes sense, but people don’t like the label because they think it implies frailty or will be judged in some way. No labels can work when stigmas remain. We need to stop lifting up what it means to be young. Young should not have value judgment just like old should not have a value judgment; it just is. That’s the work that needs to be done first and then maybe the language can come next.

Dementia is the perfect example of the intersection between ageism and ableism. It’s a double whammy to talk about someone suffering from dementia or calling someone a demented person. This person is just living with dementia. Why does dementia have to be the thing that defines them? That also goes to other kinds of forms of mental illness, and now we use that as a label to describe someone instead of recognizing that this is a part of their life experience.

What can we do on an individual, daily, practical level to redirect or eradicate ageism?

Eradicating ageism starts with the self. The first step is breaking down the barriers and recognizing we are all aging. It is important to recognize that the actual real definition of aging is not a sole process of decline. Aging is a process of biopsychosocial, spiritual change over time. It’s multidimensional and multidirectional, meaning we experience some decline, but we also experience simultaneous growth. If we start to see aging for what it really is, then it becomes a lot easier to say that you’re aging and it’s not this ‘us versus them’ barrier. I truly think step one is shifting our mindset and embracing the fact that aging is life, aging is change. It has both good and bad aspects.

We also need to take the blinders off. It’s one of the reasons I called the book Ageism Unmasked since we are so blinded by the normalization of ageism. It’s everywhere. We no longer see it and we just accept it. Taking the blinders off means we finally start to see the shame-based, fear-based messages and marketing that teaches us to be afraid of aging and to disassociate from it. Once you see it and recognize yourself as someone who is aging, you can find your motivation for change.

The next step is asking yourself – why does this matter to me? It matters for your health, your longevity, your happiness. It also matters for businesses and for workplaces. We lose millions of dollars and many years of potential contribution and productivity of people. It causes inequity. Finding your ‘why’ matters, and then you can get down to the nitty gritty of paying attention to the language that you use. Then you can ask yourself why you think you’re too old to start something new or why you make a judgement against somebody that’s younger that they’re too young to understand something. We need to recognize just as we do when it comes to racism, sexism, homophobia, and other forms of discrimination. We’ve had to practice, work on, and really recognize that certain things are offensive and can really hurt someone.

It takes years to plant ideas. It’s important to meet people where they are, and if they’re not ready, then they’re not going to hear it. You could give one small thing for someone to think about. If someone says something ageist, it could be helpful to ask a question back: Why do you think that about aging or older people? Where did that come from? How did you learn about aging? Who are your role models?

This is all to get to a dialogue about what is underneath the beliefs while recognizing this is not just one conversation that will immediately cause change. I found a 1959 issue of Ladies’ Home Journal with the headline: Look 20 years younger. Older people have been socialized with this and it has gone largely unquestioned their entire lives, so it’s deep and invisible. One conversation isn’t going to change it, but every conversation helps, and you never know how a conversation you have today could sprout something years from now.

After you recognize ageism, you can think about developing skills for disrupting social situations. It’s hard because it is uncomfortable, and it depends on the situation you’re in and who you talk to. We shouldn’t blame or shame ourselves or others because you don’t know what you don’t know. The point is to do better once you know better and to be aware. How we take the conversation in a different direction and give someone feedback when they’ve said something offensive related to age – how we redirect – there’s no single answer for that. Nonetheless, I think these are the steps that we need to start to take because that will create social change. It’s going to take a movement, but a movement takes each one of us.