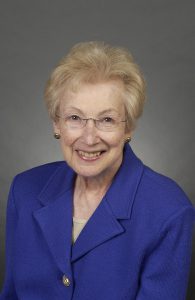 The de Tornyay Center for Healthy Aging honors Dr. Rheba de Tornyay, who served as dean of the UW School of Nursing from 1975 to 1986. A dedicated educator, scholar and nurse, Dr. de Tornyay made outstanding contributions to the fields of nursing and gerontology including lifelong efforts in the promotion of nursing research, training and services for healthy aging. During her time as dean, she led the UW School of Nursing to a position as the top-rated public school in the nation and emphasized nursing research scholarship, including establishing one of the first nursing PhD programs.

Dr. de Tornyay was a tireless advocate for the nursing profession. As a student, she pushed back against the working conditions for student nurses and helped to organize the Bay Area Student Nurses Association, despite suffering consequences for her early activism. She was the first woman and nurse elected to the Robert Wood Johnson Foundation board of trustees and directed the Robert Wood Johnson Nurse Scholars Program. She helped found the American Academy of Nursing (AAN) and served as its first board president. When she retired, Dr. de Tornyay was named an AAN Living Legend.

An innovative and thoughtful teacher, her book Strategies for Teaching Nursing set the standard for nursing education for decades after it was first published. Throughout her career, she was constantly learning and sharing her knowledge. In an East Hampton Star essay, a friend of hers recounted a story from towards the end of her life, when she changed her stance on medical marijuana and even organized a talk about it in her retirement community.

The de Tornyay Center for Healthy Aging was made possible in part by a generous endowment from Dr. Rheba de Tornyay and her husband Dr. Rudy de Tornyay and is dedicated to carrying on Dr. de Tornyay’s legacy of excellence in nursing and gerontology.

Stepping Out of Your Cultural Zone: Gentrification, Aging in Place, and the SHARP Study, with Dr. Raina Croff from Oregon Health & Science University School of Medicine
Fri, May 27th, 12:30 – 1:30 pm, on Zoom