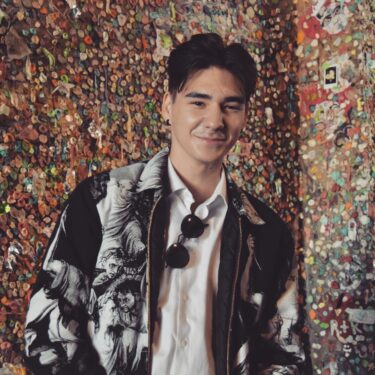 Aaron Rosser is a recent graduate from the University of Washington holding a dual degree in Psychology and Philosophy. During his time there, he worked with the School of Nursing DPEN Team to develop an evidence-based intervention for informal caregivers and volunteered his time on the board of the non-profit Circle of Friends for Mental Health. Now, he works at the Hendrickson Lab in the Seattle VA Hospital researching PTSD and its comorbid conditions.

This interview is a part of a series on ageism, completed by de Tornyay Center predoctoral scholar, Sarah McKiddy. Read her article on ageism here, and find more interviews on ageism here.

Despite the fact that we all age and share a cumulative experience with successive ages throughout the course of our lives, aging still seems to be viewed and experienced as a mechanism for division. What contributes toward this disconnect?

There are differences in values and beliefs between different age groups perhaps because every generation has certain expectations about how they think the world is and how the world should be, and these ideas are ultimately crafted by experiences and the historical context of that time. It’s only human nature to experience nostalgia and romanticize the “good old days.” Generations differ from one another and do not necessarily have the same frame of reference on which to build viewpoints. Additionally, the status, positions, and varying amounts of wealth that often come with age offer a certain privilege and sense of self.

Different generations who obviously have had very different experiences and possess diverging beliefs about the world may at times inevitably clash in terms of overgeneralizing traits like idealism and pragmaticism. There is a tendency for bias against older adults that they are set in their ways and unable to change when that’s not true at all. It might just be that in some cases, individuals choose not to change. The disconnect in expectations among generations is exacerbated by our biases, and it is easy to limit generational labels to a certain ideology.

In our Western culture, generational labels like baby boomer, millennial, and Gen Z are widely used and accepted. One problem with this categorization is that it attempts to represent a snapshot in time and characterize someone based on an archetype, thus assigning traits. What are your thoughts on the use of generational labels?

It is difficult not to use the term “generation” when describing different ages; however, when you think about how individuals are born every single second, it does not make sense to utilize such a definite term for a phenomenon that exists within a broad spectrum. Still, it can be a useful construct when defining groups of people who are defined by their common, usually historical, experiences, which shape their beliefs and concerns. Younger generations may sometimes build resentment about various issues, like inaction surrounding climate change, income inequality, employment opportunities, and housing. The varying structures of power and resulting economic disparities contrast from one generation to another, and this creates tension.

Ageism is an unproductive divisor with undercurrents of blame when it comes to institutional-levied issues like wage gaps and diminishing labor protections, which ultimately play a much larger role than age in creating socioeconomic barriers. Casting blame on age distracts by saying that differences ultimately lie in age rather than excess wealth or individuals’ overdue amount of influence within institutions as the cause of these inequities while simultaneously overgeneralizing older generations.

In reflecting on your studies and experiences, are there any philosophers or researchers that come to mind who challenged the current concepts surrounding aging?

Much of philosophy is focused on existentialism and abstract ideas of death more than the progression of life itself. Marcus Aurelius, in Meditations, discusses aging and frames some of his discussions around the inevitability of aging and urges us to embrace the time and capabilities we have while we possess them. Notably, Simone de Beauvoir, a seminal figure in the philosophy of the 20th century in existentialism and second-wave feminism, wrote a compelling book, La vieillesse, translated in the US as The Coming of Age, about the growth and richness of experiences that accumulate with age and the distance humans seek from aging and death. Beauvoir also emphasized the need for recognizing other ways to communicate with individuals when traditional linguistics are no longer possible, like individuals living with advanced dementia or experiencing aphasia. Beauvoir reminds us of our shared humanity and cautions against neglecting the voices of elders, or as Beauvoir refers to as the “conspiracy of silence.”