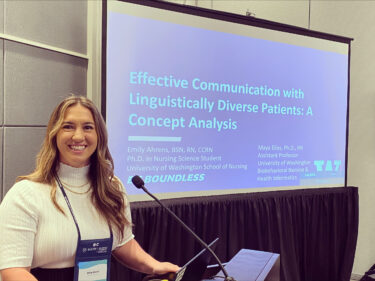 Why did you choose nursing?

I’ve always found the human body and helping people to be fascinating and compelling. Nursing specifically came to me after my close friend in college got in a severe car accident and I went and visited her while she was intubated and had several chest tubes. The ICU nurses made us feel less scared about what happened to her and what was going on. It made me feel like that was important, to be able to help people through some of these really serious, scary events.

At the same time, I had been on a trajectory to do a physical therapy type of program. I was talking to my next door neighbor, who was a critical care nurse, and she let me job shadow her. I was like, this is definitely where I want to be. I really enjoyed the critical thinking aspect. I really enjoyed the camaraderie of the ICU team. It felt very meaningful to me.

What made you want to go into research?

I wanted to impact more people than I could physically take care of. I wanted to contribute to developing new research that produces better outcomes for people. I looked into the DNP, and the PhD, and a master’s course, and a PhD seemed very interesting. Now that I’m in it, I feel like I’m definitely in the right spot. I think my brain has been a research brain this whole time.

What are your areas of research interest?

I’m a critical care nurse, and I have been for 10 years. My area of interest is ICU delirium, specifically focusing on patients with limited English proficiency. I have a theory that they experienced more ICU delirium than patients who speak English. There’s a big research gap in that area.

ICU delirium, if you don’t know, it’s a somewhat common but very consequential sequela of being critically ill, where you enter this altered state of consciousness fluctuating between hyperactivity and hypoactivity. It’s independently associated with PTSD and neuro cognitive deficits that are part of post intensive care syndrome. If someone has ICU delirium it can be devastating for their long term quality of life as a critical care survivor.

I think certainly older people are at high risk for it but also patients who don’t speak English, in my personal bedside experience, are at a higher risk for it than English speakers. So I’m hoping to do more research in that area to get down to the bottom of that problem.

What about ICU delirium made you want to study this area?

As a bedside nurse it’s really difficult to manage. Especially when they’re hypoactive, you can’t do rehab with them easily because you can’t get them to do much and that really limits their healing and their ability to gain strength. Then when they’re hyperactive it’s like you’re in a wrestling match just trying to keep your patient in bed and from pulling their lines out, even when you restrain them and restraints make it worse. A lot of hospitals, regardless of your patient having delirium, will pair you with another patient, so you have to try to maintain this person’s safety while taking care of someone else. It’s really, really stressful and difficult.

Then I learned about post intensive care syndrome and how much it correlates with more severe post intensive care syndrome symptoms, like neurocognitive deficits and PTSD and decreased strength from ICU acquired weakness. Some people can have it for years. It was devastating to me. It made me want to do more for people while they’re critically ill to try to set them up better.

Is there anything known about how to reduce ICU delirium?

It’s very, very researched. There’s probably tens of thousands of articles on ICU delirium. There’s multiple reasons why people get it, that both are and are not preventable. The sicker you are, the more severe illnesses, people get medically sedated, that all contributes. Then you’re in a hospital environment where you don’t get your circadian rhythm acknowledged, there’s continuous interruption in your sleep, and you’re in pain, and there’s so many things that contribute to that. It can be really difficult to prevent, which is why so many people get it. The most recent numbers that I have seen in research was that if you’re not mechanically ventilated it’s somewhere between 20 to 40%, and then, if you are mechanically ventilated, it’s between 60 to 80% of patients. That’s after 20 years of research.

The Society of Critical Care Medicine has a campaign that they call the ICU liberation campaign. It’s to use the A, B, C D E, F bundle to try to reduce the occurrence of delirium and post intensive care syndrome. Which is to try to get people off ventilation as soon as possible to minimize the amount of sedation that they get if anything at all. To mobilize them, even while they’re on the ventilator to reduce the weakness, to keep their brain engaged. To involve their family, which helps them stay calm and more oriented. Trying to mimic the day night cycle to protect the patients circadian rhythm as much as possible, and treating pain first instead of providing sedation when someone looks like they’re uncomfortable. But to do that bundle properly, it takes a very large culture shift in the way that critical care is done now. Part of the reason why it’s continues to persist at such high rates is that culture is incredibly difficult to change.

I know you attended AACN’s National Teaching Institute & Critical Care Exposition (NTI) conference.  Could you share a little bit about that?

I wanted to go because I’ve never been. It’s our national conference. Now that I’m more research-oriented and I’ve been taking more leadership type of roles at work, I wanted to see what  is new out there and what other people are doing. I went as both a PhD student and a clinician, in that I couldn’t help but be involved in the clinician stuff, learning about the best way to intubate someone or what does this medication do. It’s fascinating to see people putting research into place and how that’s working for them. Talking to some of the other PhD nurses was helpful to look to some examples of what you can do with a career in PhD, as well as some networking.

I am doing a symposium presentation at the Council for the Advancement of Nursing Science (CANS) in September in Washington DC. It’s a concept analysis of effective communication with patients who are linguistically diverse. It’s an evolving concept, because the only real thing that’s out there is to use accurate interpretation. I’m excited to present on it because it’s the backbone of all of my research, which is that the reason I think patients have more difficulty with delirium in ICU, is because we can’t communicate with them as well when they’re intubated. Once we establish what effective communication looks like we can start to improve that health disparity.