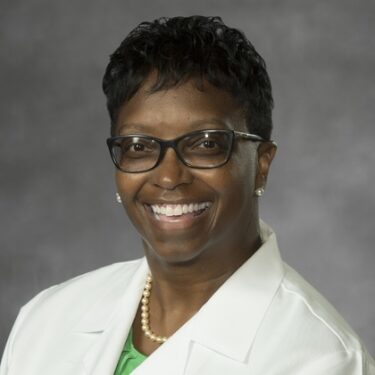 Dr. Ethlyn McQueen-Gibson serves as an associate professor at the Historically Black College & University (HBCU) Hampton University School of Nursing in Hampton, VA, and the inaugural Director for the Gerontology Center for Excellence & Minority Aging. Prior to assuming the role at Hampton University, she spent two years at Virginia Commonwealth University (VCU) in Richmond in a dual role as part of the Institute of Inclusion, Inquiry and Innovation through the Office of Diversity and the School of Nursing.

She serves on the Virginia Governor’s COVID-19 Task Force for Long Term Care and the State COVID-19 Vaccine Advisory Workgroup. Dr. McQueen-Gibson serves as 2nd vice-president of the Virginia Board of Nursing and was appointed by the Secretary of Health & Human Services (HHS) to the “Federal Advisory Council to Support Grandparents Raising Grandchildren” for a term 2018-2022. She serves as a board member for the Peninsula Agency on Aging, chair of the board for the American Heart Association, Southern Gerontological Society, and the Doctor of Nursing Practice of Color (DOCS).

In Fall 2022, Dr. McQueen-Gibson held a journal club at the UW School of Nursing to discuss her paper, “Creating structural community cohesion: Addressing racial equity in older adult homelessness“. The de Tornyay Center had the privilege of interviewing Dr. McQueen-Gibson about her background and work:

What got you into the nursing field?

My journey into nursing started with my birth, I was a three-pound preemie. I was only to be here on this earth for six months because I had an ABO blood incompatibility. In 1959, there were no neonatal intensive care units (NICUs). They did a total blood transfusion, and it was sort of a wait and see mode, but 62 years later, we are still waiting. I had some wonderful nurses who took care of me throughout the first six years of my life. Their demonstration of care and compassion led me to consider a career in nursing.

What drew you to gerontology/healthy aging work?

Summers were special, always spent traveling to the South to be with both sets of my grandparents in Mississippi. Many African American children have fond memories of being raised by their grandparents because of northern migration, by virtue of segregation in the South. My parents left my sisters and I in the care of our grandparents while they migrated from the South to the North for job opportunities. I was nurtured by my grandparents and “was loved on”, as we would say, by some wonderful elders. Most of the people that I provided care to early in my nursing career were older adults in the acute care setting. They had lots of great stories to tell you during the evening and night shifts. Between my grandparents and the older adults that I cared for in the hospital, I grew to love this specialty of nursing known as geriatrics, and they became very special people in my life.

How did you first get involved in clinical doctoral research?

I became involved in clinical research because I wanted to work with my passion for improving care in the community. My passion is and always will be improving care in communities of color and especially for elders in those communities. Since my grandparents had been special in my life and cared for me, I wanted to understand why other grandparents were putting their lives on hold and caring for their grandchildren and becoming custodial grandparents. This became the foundation for my clinical doctorate project in 2015 and spurred multiple projects to include my selection to serve as co-chair for a US Congressional advisory committee, called the Advisory Council to Support Grandparents Raising Grandchildren.

You started the Gerontology Center for Minority Aging at Hampton University, is that right?

Yes, it was a culmination of years of working towards a dream. Prior to moving to Hampton, VA, I worked at the Institute of Inclusion, Inquiry and Innovation through the Office of Diversity at Virginia Commonwealth University School of Nursing in Richmond, Virginia. This role allowed me to serve as part of an inter-professional team with undergraduate and graduate students, which provided care in the community-based clinics in six low-income housing units for over 700+ older adults. This role prepared me to transition to Hampton University and build a template for a similar design in the Hampton Roads community.

The unique thing about the Gerontology Center at Hampton University is our focus on vulnerable populations and communities of color. This has become so important in 2020 and 2021, with the COVID-19 pandemic’s adverse effects on communities of color and with the social injustice issues we have all experienced with the deaths of George Floyd and Brianna Taylor.

Our mission is to serve as a comprehensive resource center for older adults and their families through education, outreach, training, research, and service. Our vision is to be the center that will identify and address relevant aging issues applicable to older minority populations and increase the capacity for older adults to lead independent, healthy, and functional lives while remaining productive members of their community.

For the de Tornyay Center’s Journal Club, you talked about a community coalition to address homelessness?

Yes, the paper that I talked about for the journal club was part of my work while employed at Virginia Commonwealth University School of Nursing as an assistant professor. I was part of an inter-professional team that formed a coalition that helped address homelessness in the Greater Richmond, VA community. We were looking at how we address racial equity for older adults who were homeless in the community of Richmond. We wanted to help those who needed to have stable housing options. The issues related to their homelessness were multifaceted, and the coalition was built to address those multiple issues.

Is this kind of coalition approach standard, or is it a new approach?

This type of coalition is now becoming the standard. You may be familiar with the Diverse Elders Coalition (DEC) based in New York City. We are not as well established as DEC, but our small community coalition was established to better address older adult homelessness within the lens of understanding the needs of older adults and racial equity.

What were the challenges and rewards you had putting together this coalition?

We hoped to address a disconnect between healthcare and senior housing placement programs, which created unaddressed health issues and complications. It was a challenge bringing multiple agencies to the table for the coalition. We were not all health care providers. But we also found there were rewards as we built the community coalition. The coalition is still a team today. The team is listed below was not the traditional team:

(1) Homeward, a planning and coordinating organization for homeless services in the greater Richmond region; (2) Richmond City: Virginia Department of Health, the nursing health division; and (3) the Virginia Commonwealth University (VCU) Richmond Health and Wellness Program (RHWP), a wellness care coordination service offered in five Richmond public housing buildings. This partnership included academic, public/private health, and housing agencies. We needed to cast our net wide. We also added in faith-based communities, bringing in ministers to the table. We wanted to have everybody’s thoughts in the team for the community.

Do you feel like your background as a practicing registered nurse has influenced the community/public health work that you do now?

My clinical doctorate, focused on community health and public health, has been a perfect fit. I just returned from doing a presentation at the American Public Health Association’s national meeting in Denver, Colorado in October 2021. That presentation focused on the messaging of COVID and vaccine hesitancy in vulnerable populations. A great amount of that vaccine hesitancy has been in vulnerable communities that are 55 years and older.

What current clinical research projects are you conducting in Virginia?

My current background in clinical research and community engaged research has prepared me to serve as co-principal investigator. I serve as co-investigator for a 4-year R37 NIH study, titled “Addressing Low-Income Housing Resident Mistrust in COVID-19 Guidance” with eight low-income public housing agencies (PHA) serving 75,275 residents in the cities of Virginia Beach, Richmond, Norfolk, Newport News, Portsmouth, Hampton, Suffolk and Chesapeake. The goal of the project is to ensure that efforts to increase resident compliance with public health guidance do not increase mistrust of public health messaging and relevant institutions. The focus is on COVID-19 related guidance and how building relationships with medical providers (via telehealth) can be used as a strategy to reduce mistrust in COVID-19 guidance. The research project identified resident concerns about COVID-19 testing. The goal of this research has increased COVID testing, by adapting COVID-19 testing protocols to be more responsive of the needs of the residents following weekly Zoom sessions with PHA residents.

I also wrote a grant, in collaboration with the School of Pharmacy through FEMA, which allowed the university to purchase a large mobile van. We are using the mobile van to administer COVID-19 and influenza vaccinations throughout the community, to address social determinants of health in “real time”, and improve health outcomes in vulnerable communities.

Where did you get the idea for the mobile health van?

The COVID-19 pandemic laid bare the many inequities in vulnerable, low-income communities and lack of transportation was one of those barriers once vaccines became available for distribution in the community. Hampton University was aware that transportation and vaccine hesitancy would be a “double” barrier. So the president of the university formed a collaborative team to begin researching options for funding, for the mobile van, and for becoming a licensed vaccination site. All were accomplished by March 2021.

In a couple of weeks, we’re going to have a large jazz festival at the Hampton Convention Center. We are going to take the bus and position it outside the convention center. That’s where people will be able to have their COVID-19 boosters, because a lot of older adults will be at the jazz festival.

Do you have any advice for students who are early in their nursing careers?

For nurses that are early in their career, especially those who are working on their baccalaureate degrees, I think they should explore all options for advancing their education beyond the bachelor’s degree to include masters and doctoral degrees, clinical and research options. They should spend time with colleagues in these fields during their undergraduate years, if possible, to help “plant the seed” of possibility. I never had the “seed planted” until I was out in the workplace and began to work alongside advanced practice nurses. I began to see the value of clinical research and how it can make a difference in quality improvement at the bedside. I began to see how I could be the clinical practice nurse who could be the one to make the difference at the bedside or in the community.

Don’t think that the master’s, clinical, or the bench doctorate degree is not for you. Someone must continue that research, and why not you? I think it’s important for all nurses to see themselves as leaders and always take a seat at the table as a leader outside of the walls of healthcare. Live your passion through continuing your education, it takes time but, in the end, it is truly worth the journey.